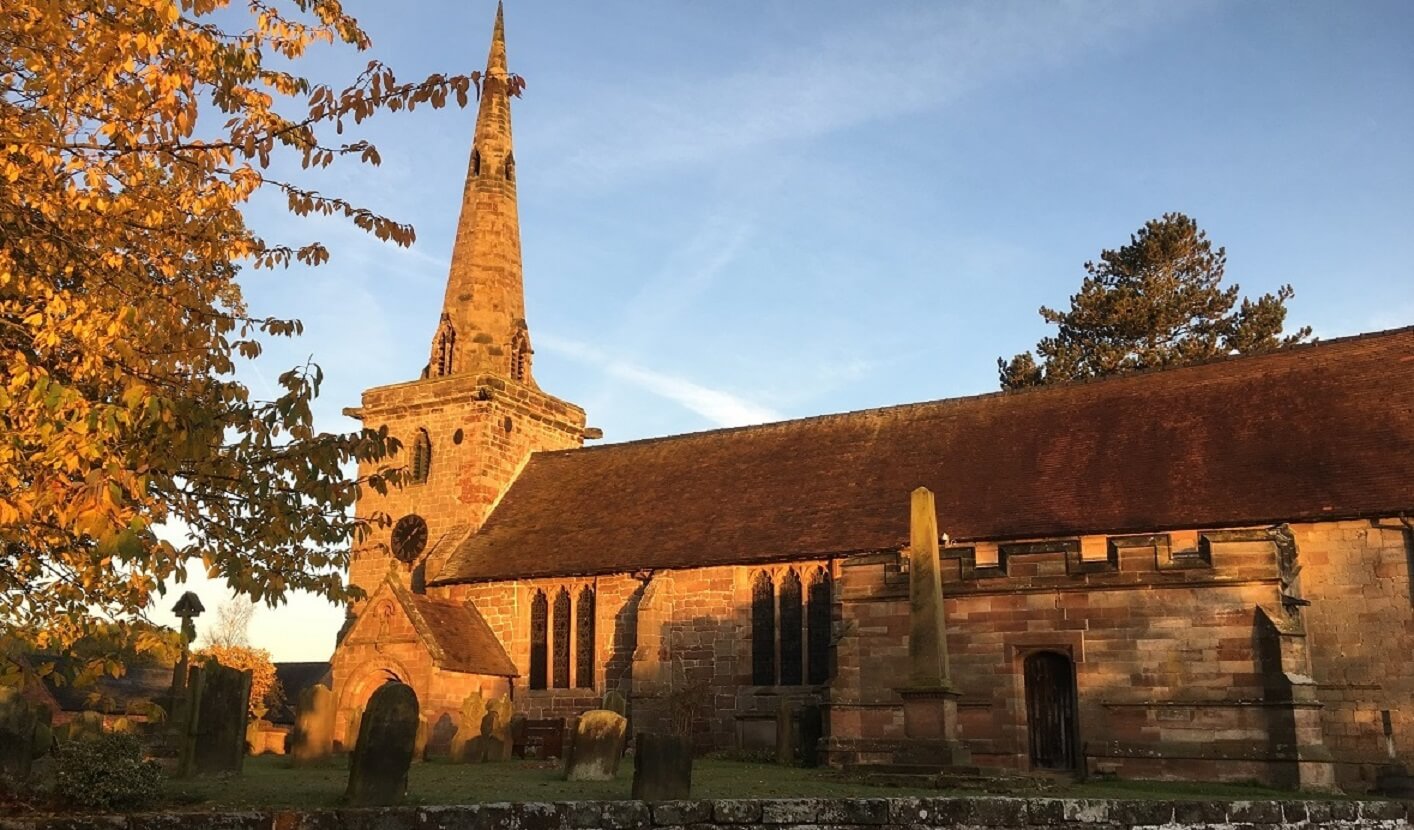 Who was St Editha?

Which St Editha? There are several saints of this name, all of them from the shadowy Anglo-Saxon period. The parish church's dedication would seem to be to either St. Editha of Polesworth or St. Editha of Tamworth. We do not really know whether they were the same, or two different, people.

St. Editha of Tamworth, who died in 960, was almost certainly a grand-daughter of Alfred the Great. In a convent in Tamworth she won great fame for holiness and it was believed that miracles had been performed through her intercession.

The Polesworth Editha was a daughter of Egbert (sometimes styled the first King of the English) and an aunt of King Alfred. King Egbert founded a convent at Polesworth in 827 and constituted Editha as Abbess.

The Abbess and nuns of Polesworth retained the right of presentation to the living at Church Eaton from 1100 until the Dissolution in 1539 so, after this long association, it seems certain that Church Eaton's St. Editha is that of Polesworth. And this would be in accordance with local tradition.

The feast of St Editha of Polesworth is on 15 July (the same date as S. Swithin), the day on which it is assumed she died.

Origins of the church

The origins of the Church are lost in the mists of history, as is so often the case. The English had been Christians long before the time of William the Conqueror whose Domesday Book of 1086 states that '..in Eitone there is land for seven ploughs, In demesne is one (plough) and three serfs: and eight villeins and eight bordars with the priest have three ploughs.' This implies a resident priest, an established Christian community and probably a Church.

St. Editha's is situated on a site of ancient sacred origin. Nothing remains of any original Anglo Saxon Church although it is thought that the old Porch, demolished in 1889, belonged to that period.

Early in the twelfth century the advowson of the church (the right to nominate a person to hold a church office in a parish) passed to the nuns of Polesworth Abbey. One account, now in the Salt Library at Stafford, says that it was given by Robert De Stafford, c1100, when his kinswoman, Edelina, was about to become a nun at the Abbey.

It is also said that the gift was made by Robert de Brinton, with the consent of his wife, Eva (possibly a great grand-daughter of Edelina) sometime between 1166 and 1185, when they were jointly holding the manor of Church Eaton.

Whoever was responsible for the gift, however, there is no doubt that it was definitely made, and also that it was to prove a fruitful source of dispute and litigation between successive Abbesses and the de Brinton family until the 16th century.

The present building dates from around 1170. The Church at that time was much smaller than it is now, with a Nave and Chancel. The Chancel terminated around 5 metres west of the present east window. Dating from this period are parts of the south west wall of the Nave. The Font in the North Aisle is also dated around 1150.

The Tower was added in the late 12th Century with the spire added above possibly in the 15th Century. During the Gothic period, the western three bays of the Nave were altered and the North Aisle added. The robust circular piers in the north arcade are good examples of early English architecture.

One of the earliest effects of the Reformation was to resolve the disputes about the rights of Polesworth Abbey, which surrendered to the King in January 1539, and was thereupon dissolved. The advowson was disputed until 1640, when the rights were bought by Thomas Chetwynd, Lord of Church Eaton Manor, in whose family (latterly as the Earls Talbot and Shrewsbury) it continued till the middle of the twentieth century. Presentation is now in the hands of the Bishop of Lichfield and the vicar of Gnosall, who nominate alternately.

During the later Gothic period, the Chancel was extended to approximately one metre of the present east wall and then in the late Gothic, perpendicular, east windows were added in the Aisle and the Chancel.

The Chancel east window is the most impressive feature of the building and fills the wall from north to south and nearly to the underside of the roof. Local tradition notes that the tracery for the east window was brought from St. Paul's Cathedral after the great fire of 1666. It would appear more likely that it was brought in 1538 from one of the three Stafford religious houses after their dissolution.

In the 17th Century the Vestry was added on the north side of the Chancel and part of the North Aisle was converted into family Chapel now known as the Crockett Chapel but formerly the Giffard Chapel.

In 1799 the Church was re-floored and re-pewed. Up to that time pews had been box pews and the pulpit a tall three-decker in the centre of the Nave. There were major changes in the Victorian period.

For current information on the church including services and key people, please see our Information page.